Hi all! It’s evility again, with her promised update on two minor characters and three bosses. So, without further ado, let’s get started right away! The two minor characters below, Ouyang Hui 欧阳慧 and Hai Tang 海棠, are for some reason released only on the PAL5 official website, and not the Taiwanese website. This is why evility could not find full body images for either of them. But the large avatars, of course, look just as appealing. 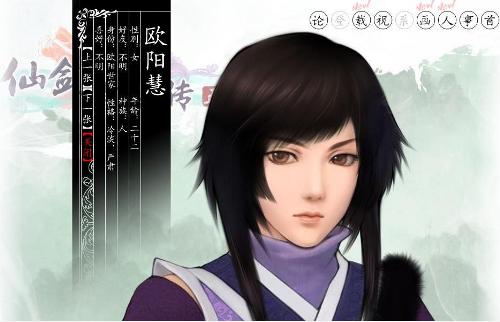 Gender: Female Age: 22 Best Friend: Uncertain Species: Human Identity: One of the prominent Ouyang family Character: Cold, serious Hobby: Uncertain 性别：女 年龄：22 好友：不明 种族：人 身份：欧阳世家 性格：冷淡、严肃 喜好：不明 The last name Ouyang is unfamiliar in the XianJian series, so the appearance of a prominent Ouyang family marks an interesting new phenomenon. What can be the relationship between this girl and another girl released earlier, Ouyang Qian 欧阳倩 (check Chibi Jennifer’s posts)? We should for sure look forward to it.

Gender: Female Age: Uncertain Best Friend: Uncertain Species: Human Identity: Uncertain Character: Uncertain Likes: Nature, animals 性别：女 年龄：不明 好友：不明 种族：人 身份：不明 性格：不明 喜好：自然、动物 Does this design look familiar to you? That’s right, the Miao people return, after their absence in PAL3a and PAL4. The Miao people are, of course, associated with Nuwa; could she be the new Nuwa descendent? What is her relationship with Du Ying 毒影? She may seem harmless, but what is her character really like? And, of course, XianJian wouldn’t be XianJian without their epically strong bosses who take ages to defeat. The Taiwanese website has released three different sets of bosses, and evility will provide you with a glimpse of them now:

They may seem easy to defeat, but if you don’t take them serious, you may have to pay a price… personally, evility thinks that these three “oddities” are not major bosses. Evility doesn’t even think they look evil. Perhaps with them it would be a trial – a trial for your abilities. Who knows?

Not much information is released about them. Evility personally speculates that they are some sort of guards, but don’t take her word for it ;D. And the last of the three bosses released, as well as the most flamboyant: 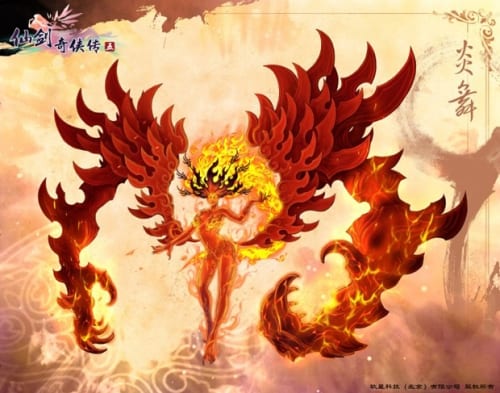 A beautiful but frightening spirit, she dances within fire. You’d probably have to get some water-related props ready in order to take her on! It would not be fun to be smacked in the face by her gigantic arm. AAAAnd that was all evility had to offer today. Tomorrow, she shall reveal what you’ve all been waiting for – information as well as pictures on the two newly released main characters, Jiang Yun Fan 姜云凡 and Tang Yu Rou 唐雨柔

Lastly, but definitely not least: