Ling’er as a Nu Wa Descendant

I was re-watching the part where Ling’er first turns into her true form, a Nu Wa descendant. I didn’t know too much about Nu Wa apart from what was given in the series, so I decided to do some extra research to find out more about a Nu Wa’s powers, it’s role and origin. I came across various written content in my search and compiled them here for your reading pleasure. Hopefully you will gain some extra insight into this character 🙂 Since this is a myth, there are many versions and variations of the story with nothing definite. However, these stories all speak of the significant female heroine. 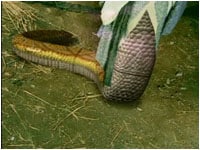 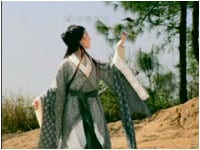 “In Chinese myths, Nuwa is the creation deity and the heaven-repairing heroine. It was said that there was no creature in the world at the beginning of the genesis. Thus, Nuwa made humans with clay. Soon after that, there was a collapse of the northwest sky followed by gales, heavy rain, snow and hail, and the world was suffering from flood. Seeing this, Nuwa began to repair the sky with stones of five colors and then adjusted the four sky poles in place, which enabled the people to live a happy and peaceful life again. The flood myths are also popular among the ethnic groups in southwest China such as Miao, Zhuang, Yao, Bai, Dai, Hani, Lisujingpo, Buyi, Bulang, Naxi, Lahu, Benglong, Pumi and Achang ethnic groups. These myths relate that the ancient ancestors offended the deities and the God of the Heaven punished them by creating disastrous floods. Only a sister and a brother survived the floods by hiding in a gourd or other flood-proof tools. Later, they got married under the direction of the God and became the ancestors of human beings.”

Origin and relation to Chinese Paladin

The link between the myth to the storyline of Chinese Paladin is highly prominent, especially to the original storyline of the game. In the RPG, Ling’er obtains the five-coloured stones during her journey with the help of Li Xiaoyao, and this is later used as her source of power. Nan Zhao Guo was suffering from a severe drought and the Black and White Miao people were in constant battle with each other. When Ling’er is healed from her injuries, she uses the 5 elemental stones to summon rain upon Nan Zhao Guo which brings nature life and consequently stops the war.

In Chinese Paladin (TV Drama), Li Xiaoyao obtains all 5 (coloured) elemental stones to heal the injured Ling’er. Later, it was in Bai Yue’s possession. It is said the five coloured stones have a direct connection to Nu Wa.

In the TV Drama, there is a lot of storytelling about Nu Wa creating humans, much like the following (though not exact):

“The goddess Nu Wa lived upon the earth that Pangu the giant had created, which was a place teaming with life and filled with beauty, entirely suitable for a goddess. But she was the only goddess on the earth, and she was lonely, although, having always been lonely, she did not know that it was loneliness from which she suffered.

One day, as Nu Wa sat in a state of picturesque but rather abstract emotional emptiness beside a sparkling pond, she chanced to see her reflection in the water, and it occurred to her to try to make a small model of herself from the lakeside mud.

It was a better model than you or I would make, since Nu Wa was a goddess, but even she was surprised when she gently set it down on the ground and it began to move, rose, sang and danced, and called her “mother.” Delighted, she made another figure, and another and another, and each came to live in the same way.

Day in and day out Nu Wa amused herself making mud figures and watching them come to life. An at length when she wearied of sculpting them, she chanced to flick drops of mud off a vine, and these too came to life and became human, until there were humans everywhere. 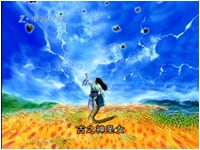 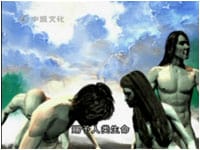 Reference used in Chinese Paladin
Due to confusion and fear, Ling’er “kills” all the people who tried to beat her to death. She cries in fear of what had happened, but later learns of her powers from Mountain God. She starts to think positively about life and the happy times with Xiao Yao. These positive thoughts recreated life and nature, and people were revived. 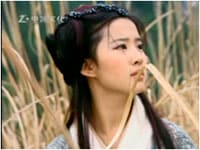 In the Drama, when Ling’er’s mother sacrificed herself with the water demon 10 years ago, she created a statue of herself governing the water.

Nu Wa as a Goddess

For the Miao people, Nu Wa is the traditional divine goddess they worship. This is relevant to Ling’er as she travels to Nan Zhao Guo where her fate to save the Miao people are predetermined.

Conflict due to appearance?

There is obvious conflict in appearance due to the fact a Nu Wa looks like a half human, human snake.

In the series, the Miao people clearly see Ling’er’s mother as a “snake demon” rather than a Nu Wa Descendant, under Bai Yue’s influence… How can one tell the difference between a Nu Wa or a real snake demon? In the TV Drama, Ling’er faces many hardships, expecially in her Nu Wa form. The Sword Saint also insists she is a “snake demon”, however- later explains she is an important figure.

In the game, the sword Saint traps her into a Tower due to her dangerous “demonic” nature.

In the final episode of Chinese Paladin, Ling’er faces courageously with the Leviathan which had its sealed broken by Bai Yue. The leviathan created floods, killing many lives of the Miao People. Ling’er was able to destroy it but due to severe internal injuries, she also dies.

In the game, Bai Yue combined itself with the leviathan with the help of Ling’er’s blood which made him close to impossible to destroy. The only way to save everyone was to suicide with it.

The Leviathan itself can be related to the biblical sea monster referred to in the Old Testament. It’s origin relates highly to Christianity and therefore clashes with the Chinese Myth. Whether there is any connection is questionable, however the image defeating the leviathan has high similarities: 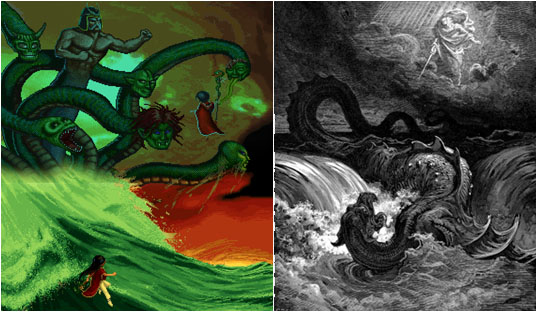 Picture on right: “Destruction of Leviathan” 1865 engraving by Gustave Dore.