Bu Bu Jing Xin 步步惊心 (also known as Startling by Each Step)  is a new 35 episode time-traveling drama starring Liu Shishi, Nicky Wu and Kevin Cheng. Liu Shishi, a 25 year-old modern day woman woke up from a car accident to find herself in the body of a 16 year-old Manchu girl living in the 18th century Qing Dynasty. In her new life, she became deeply entangled in Aisin Gioro princes’ battle for the throne. 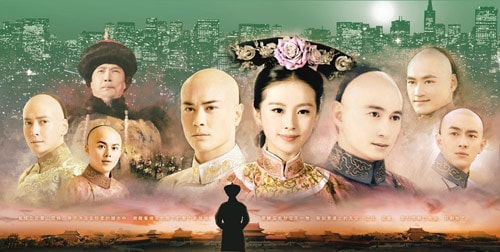 The drama’s theme song “One Persistent Thought” Yi Nian Zhi Zhu 一念執著 is a duet between Hu Ge and Alan Dawa Dolma. Hu Ge has sung many songs for his dramas such as “June’s Rain” (Chinese Paladin), “Forgetting Time” (Chinese Paladin 3), “Dare to Love” (Fantasy Zhu Xian) and many more.  He has also sung is the theme song for “Strange Hero Yi Zhi Mei”. You can download his albums here

Alan Dawa Dolma (professionally known as Alan) is a female Tibetan-Chinese singer active in the Japanese music industry. Alan’s surprised the Chinese audiences with her divine voice when she sang the themes for Red Cliff and Red Cliff 2.

In the blink of an eye, one persistent thought
Is fated to disappear like moths flying into a flame
Knew it was trouble, why am I still at a loss
Best not to meet, best not to miss you
only this way I will not fall for you
another step and I brush past you
and step by step I fall for you

It is the fault of time
that we could only miss each other
I miss you so much, you are so far away
If I knew earlier that it would be bitter
I would still not want to escape this moment in time
“What a pity” these words hurt my eyes
two worlds later…

It is the fault of time
that we could only miss each other
I miss you so much, you are so far away
If I knew earlier that destiny was a wrong that I could not avoid
stay in this moment of time
Love is deep, fate is shallow