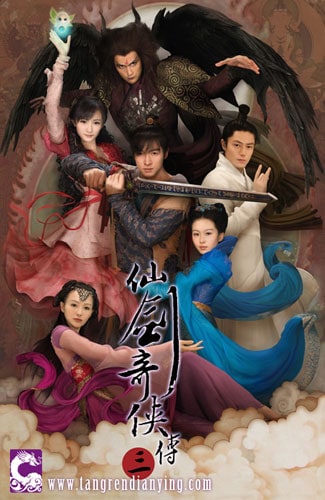 Jing Tian is a mischievous pawnshop assistant who because of the power of a mystical jade, crosses paths with the spoiled and sassy Tang Xue Jian. Xue Jian is the beloved granddaughter of Tang Manor’s Tang Kun, who meets with danger when an evil cult tries to take over control of the Tang Manor. Xu Changqing, the eldest disciple of Mt Shu Sect aids the pair in defeating the cult and rescuing the Tang Manor. Meanwhile, Chonglou, ruler of the evil world, breaks into Mt Shu’s Suo Yao Pagoda to retrieve a magical sword. He passes the sword to Jing Tian, claiming that it belonged to latter when he was a deity in his past life and forces Jing Tian to battle with him. The 5 elders of Mt Shu Sect call upon Jing Tian and Changqing to attain 5 mystical pearls to seal up Suo Ya Pagoda and destroy a powerful force of evil so as to save the world from destruction. Together with Xue Jian, the group set off to accomplish their mission. On the way, they overcome various obstacles and must solve mysteries pertaining to their pasts…

Chinese Paladin 3 is a prequel to Chinese Paladin (Xian Jian Qi Xia Zhuan), both based off the RPG of the same name. It takes place 50 years before the start of the first series, however the connection is very loose.

Xu Changqing and Zixuan’s romantic relationship is the main backstory to Chinese Paladin III. Their love endured for three lifetimes, lasting approximately 200 years. Destined to become an immortal, Xu Changqing dedicated his life to studying Taoism and becoming a Taoist priest in all three lifetimes. However, in his first two lifetimes as Gu Liufang and Lin Yeping, he failed because of his choice to resume secular life and be together with Zixuan. He was mortal, a human, whereas Zixuan was the descendant of the goddess Nuwa. As Nuwa’s descendant, Zi Xuan is immortal and able to retain her youthful looks. For all three lifetimes, her passionate and undying love for Changqing never wavered; and although Liu Fang had been reincarnated as Lin Yeping and Xu Changqing, his love for Zi Xuan never changed and he was still able to maintain his strong feelings for her. In Changqing’s third and last lifetime, Zixuan gains the courage to sever all ties with him and let him go, so that he can train properly as a priest to attain enlightenment and be forever freed from mortal sufferings.